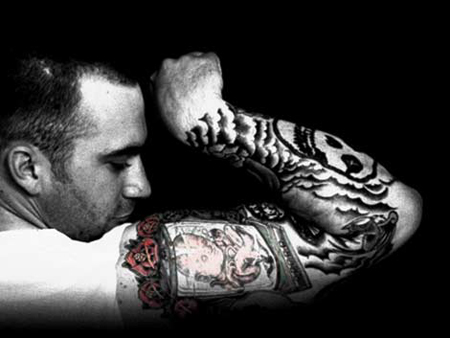 Last night, I watched a program on PBS called “Tattooed Under Fire”. It was a fascinating film following some of our young military folks before, during, and after being deployed to Iraq.

To be honest, some of the stories were horrifying…difficult to watch and hear.

What became the most disturbing was seeing a few of the young men after they had returned home…struggling to shake some of the tragic events that took place while in Iraq. PTSD is a very real thing…that impacts the mental, physical, emotional, and spiritual health of many of our veterans. The loss of lives weighed heavy on the hearts, minds, and souls of these young men and women serving our military. As I listened to the stories, my heart was breaking. In fact, at one point, Emily came in the room and said, “Are you okay? You look troubled.” Truth is…I was.

At one point in the film, a young man is sharing a story about one of his “kills” in Iraq. His unit was under fire…he looked up and saw a young child. The next thing he saw was the child raising a rocket launcher. He said, “I had no choice. It was either me and 5-6 of my fellow soliders or it was the kid.” Then, he kept repeating, “It was just a kid.” And, you could see how troubled he was as a result.

Some folks have issues with tattoo’s. I never have. I believe that tattoo’s are a form of expression. They communicate a story. They tell of love. They tell of pain. They tell the story of one’s life.

I believe it’s healthy for all of us to have storyboards. Now, I’m not saying we should all go out and get tattoo’s. I’m simply saying that we all need a way to tell our stories. Whether it’s a tattoo, a blog, a song, a poem, a short story, a video project…whatever the form, we need to tell our stories. Telling our stories isn’t just about remembering…it’s about healing and wholeness.